THE DISCOVERY OF CAPE ST. FRANCIS & BIRTH OF THE ENDLESS SUMMER

The documentary feature, Discovery of Cape St. Francis (CSF), starts in a time and a place when the world was filled with seemingly endless, and still unknown, perfect waves. There were only the discovered breaks of California and Hawaii making headlines in the burgeoning arena of surf filmmakers lead by Bud Browne, Jon Severson, the founder of Surfer magazine, and Bruce Brown to follow.

Every surfer’s dream in the 1950’s was to explore foreign places and find a wave that’d never been ridden. In this year of 2018, we take a look back to simpler times when the world was still large. To learn our history so we can better understand our future. The Endless Summer is one of the most beloved and influential documentaries of all time–“A perfect movie,” said the New Yorker.

But what was the dream before the dream? What was the inspiration required of a surfer before The Endless Summer of 1966—before “surfari” became a part of the American lexicon? Rewind the clock to 1958 in Laguna Beach, CA. Pioneering surfers like Dick Metz and “Peanuts” Larson were exploring the waves in their backyard at San Onofre. Hobie Alter started making wood boards out of his Dad’s garage on Oak St. It’d become the nexus of surf culture that’d fuel the explosion of the surf industry not many years later.

Metz charts his around-the-world surf journey, spanning 1958-1961. CSF is the story behind the discovery of breaks that’d become legend in The Endless Summer. Metz tells of the equal parts luck and fate that’d lead him to the edge of the water in Cape Town where he rescued the board of the now infamous John Whitmore, whom Metz calls the “Oom” (Uncle) of South African surfing. It was Metz who first stumbled upon the perfect waves of Cape St. Francis, later credited to Bruce Brown and dubbed, “Bruce’s Beauties”– the source of a long running joke between the two.

On a closing note, CSF meets up with the worldʼs best surfers to learn how The Endless Summer influenced their surfing and inspired them to give their lives to the sport. We also meet up with ‘tastemakers’ of pop culture and examine The Endless Summer’s impact beyond the surf world. How could one idea first, then one film, next, transform so many? 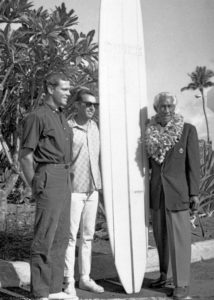 The quest for the meaning – itʼs the search beyond whatʼs known, that gives our lives purpose. In this crowded world, the surfer can still seek and find that perfect day, the perfect wave, and be alone in the surf with his thoughts. – John Severson